Sid is not an old friend whose mum let us stay at her house for the weekend. It is a great little hostel just outside the medieval city of Carcassone. No that was not a typo, I did mean to say hostel and not hotel. I know that some of you reading this will not believe that we stayed in a hostel but we have to admit that it was great. A real little gem.  Essentially it is a homely little gite, where we had a double room, with small dorms in cabins in the tree shaded garden.  It is no longer run by Sid (or his mum) but by a really friendly Bolton lass called Tracy (her dog Fergus and her two cats Sid and Aury) who couldn’t do enough for us!  We had some really interesting housemates which meant that we did not stop laughing all weekend. 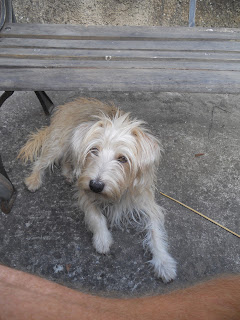 The short journey in to Carcssone was definitely worth it.  The old walled city is utterly breathtaking.  Its two spectacular rampart walls, joined together by 52 stone cinderella towers, look like something straight from a medieval fairytale.  It doesn’t require a vivid imagination to picture the archers sat atop the walls defending their territory whilst jousting and merriment took place in the dry moat.   We decided to fight our way through the hoards of absent minded tourists slowly ambling the winding alleyways mouths ajar in admiration and and take a trip around the chateau.  The quirky little anecdotes and historical background made investing in an audioguide worth it. 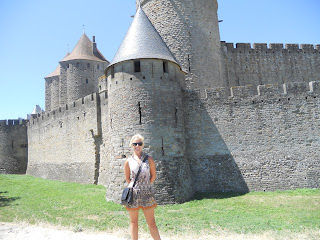 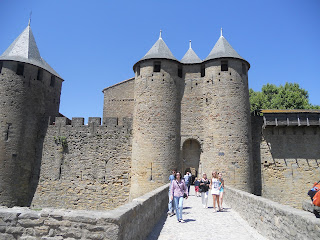 Quirky is perhaps a good word to describe much of our stay - including our first evening in Carcassone.  We opted for a restaurant which served up a degustation plate of starters, along with a main and cheese (all at the same time). All of the dishes were made with locally sourced fresh produce which were sold in the adjoining shop.  The menu was so complicated that (other than our main course - which we specifically chosen) we had no real idea what to expect.  As such we were very pleasantly surprised when everything was delicious, including the main course of cassulet, (a speciality of the region much like a thick broth full of white beans, cubes of pork and a huge chunk of duck - In hindsight perhaps more of a winer dish - I couldn’t move for hours after I had finished!!!). Better than the food however was the wine.  Not even the fact that he had over 200 bottles to choose from but more the self service option that we plumed for.  We were provided with an electronic card (pre loaded with 100 Euros - very dangerous) which we used to select a taster glass, small glass or large glass of any one of the wines.  The bottles were all visible through the glass and were separated by colour. Thankfully we had a seat close to the machine so it was not too embarrassing when one of us went back very 5 minutes!!!  We finished our evening by watching a very random free open air concert with a seriously  aging rock band and a pair of french piano players who appeared to be singing love songs to one another - certainly different! 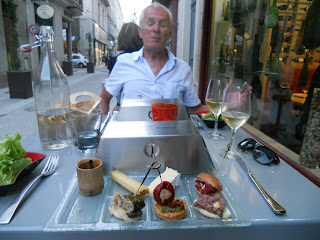 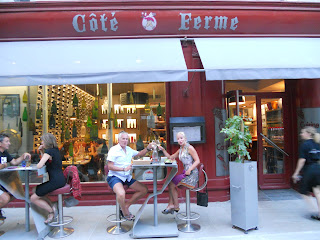 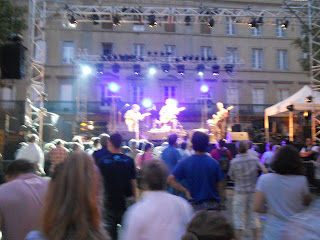 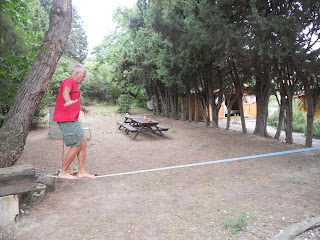 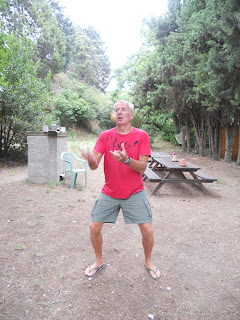 Unsurprisingly he was a disappointment at both and his interest quickly feigned.  We decided a better option was to take a trip to the nearby village of Limoux to pick up supplies for the gastronomical delight that we planned to make for ourselves that evening.  Having been truly fleeced at the boucherie (for what turned out to be some delightful faux fillet) we picked up a bottle of fabulous pink champagne (although technically they cannot call it Champagne). The whole thing was grown, picked, made and bottled in Limoux.  We then sat down to a hostel meal Deb and Mike style with steak, salad and champers! 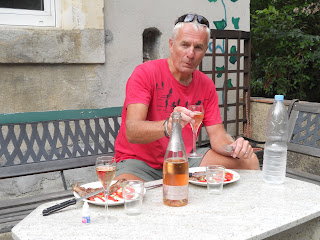 We rounded of a fabulous day by taking a trip to the top of a nearby hill to watch the hundreds of thousands of Euros that must have been spent in fireworks shooting off the ramparts of La Cite. The 20 minute demonstration was pretty spectacular, at times made to look as though the whole city was a blaze.  the 700,000 visitors that flocked in to see the demonstration left with smiles on their faces - that was until they sat in their cars for 3 hours trying to get home!

Debbie and Mike
Manchester, United Kingdom
Hi, we are Debbie and Mike, a married couple from Manchester. We are Solicitors taking a 4 month break from our normal life to travel around France (and other adjoining countries) in our car. Why? Well, in addition to Mike's mid-life crisis and the fact that life is too short to worry about what ifs, its because France is on our doorstep, full of great food, fabulous wine, amazing scenery, outdoor life and hopefully - some sunshine! We will let you know with regular updates whether this turns out to be true.